The divine glory of our nation’s capital

It may come as a shock to some people, but I am delighted to say that Canberra is now my home.

For those who aren’t so familiar with Australian snobbery, Canberra (along with our South Australian sister, (R)Adelaide) tends to get a pretty bad rap. Boring; nothing to do; weird; where are the milk bars?!

While I nod my head appreciably at the last comment (and, dare I say, groovy wine bars?!), the first few seem to come from people who a) have never been to Canberra, b) came once during primary school to visit Parliament House or c) have very poor taste.

My response to this:

Clearly, I am a “nature lover” (surprising, I know) and Canberra offers “nature” in droves. As well as being great for one’s physical and mental wellbeing, this also presents some great work opportunities as the field really isn’t that far away. To illustrate, I’ll briefly introduce a couple of the field sites where some of my colleagues in the Fenner School of Environment and Society work.

Located in a couple of nature reserves 15 km north of central Canberra, the Mulligans Flat–Goorooyarroo Woodland Experiment is a partnership between the Australian National University, the ACT Government and CSIRO. The aim of the project is to find ways of improving box-gum grassy woodland for biodiversity and the experiment manipulates and monitors a whole raft of factors (see figure above).

One of the many exciting aspects of this experiment is the reintroduction of the Tasmanian Bettong (Bettongia gaimardi) – it has been extinct from the mainland of Australia for 80 years.  Regarded as an ecosystem engineer, it will be interesting to learn what effects the Bettong has on the ecosystem.

Based in the Buccleuch State Forest 100 km west of Canberra, the idea for the Tumut Fragmentation Experiment was sparked when David Lindenmayer was flying from Canberra to Melbourne. Peering out of the plane window, David saw an area of native forest that had been cleared for a radiata pine (Pinus radiata) plantation. Rather than just bulldozing the whole lot of it though, patches of native forest had been left. Representative of the original forest, these patches varied in size from half a hectare to 200 hectares thus providing a great way to study effects of forest fragmentation on biodiversity. 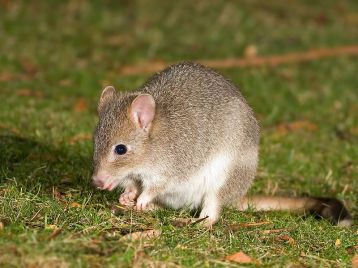 In all, the Conservation and Landscape Ecology group at Fenner run seven large-scale longitudinal field studies, all located in south eastern Australia. Long-term, large-scale ecological studies are pretty rare in Australia, yet provide incredibly valuable insights because many ecological processes occur at the landscape-scale, it can take a long time for ecosystems to respond to certain actions and it can also be very hard to detect ecological responses when background levels of variability are so high (just think of weather patterns versus climate change). A major impediment to establishing long-term studies is the fact that most grants last for only a few years. While there is increasing support and appreciation of long-term studies (the merits of which are nicely illustrated by the Long Term Ecological Research Network in the US), many researchers rely on passion, strong working relationships and cheap labour (i.e. their own) to maintain such research.

I have been in the Fenner School at the Australian National University for a few months now and I am just loving it. Although I am still employed by the University of Melbourne and retain strong links with the Quantitative and Applied Ecology research group, I will be based here for the duration of my grant and hopefully, fingers crossed, beyond that.

If you are ever in town, or are keen to visit, please drop me a line. We could even go to Parliament House.

5 Responses to The divine glory of our nation’s capital